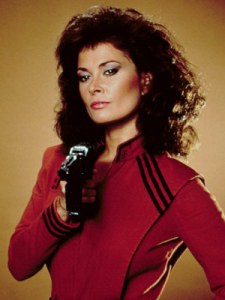 This week on Boxcutters our special guest was Jane Badler, who is probably best remembered as Diana in the 1980s science-fiction franchise V. Actors in science-fiction often complain they get typecast and find it hard to work – I wondered if Jane ever worried she’d be stuck with hamster-eating roles for the rest of her career.

There’s a temptation to turn an actor like Jane Badler into a pop-culture punchline – look, it’s the evil lizard-lady from V! But that would not just be insulting, but also unfair – Jane Badler is no Limahl. She has an extensive body of work, ranging from guest appearances on Fantasy Island and Murder She Wrote to regular roles on Falcon Crest and the second Mission: Impossible series. Sure, it’s not Ibsen –  but who is?

So while I was looking forward to having Jane on the show, I wasn’t a crazy fan-boy – I mean, it’s not like it was Louise Jameson! (Louise, why don’t you answer my letters?) I had enjoyed the original mini-series of V, but I thought the ongoing series was pretty dire and I hadn’t watched any of it since it first aired. So I was surprised that an odd thing happened when she arrived – Josh and I were both a little star-struck by her (I can’t speak for Brett, as he is inscrutable).

I think two things were happening here – one was simply the cultural-cringe. Most Australians consider US television to be “real” telly, and even Jake And The Fatman seems more glamorous than Blue Heelers.

The other part is somewhat stranger. I don’t want to sound insanely pretentious by saying something like “it was a near-mystical belief about the transference of power” – but I think it may have been a near-mystical belief about the transference of power. When you’re chatting with someone who has worked with Kim Novac and Angela Lansbury, and appeared in a number of the most famous (and most-repeated) TV shows of all time, you find yourself hoping the magic will rub of you. It’s similar to how you can’t see Paul McCartney without getting the urge to shake him and see how much money comes out.

I think a lot of people become writers as an attempt to achieve immortality. We’re hoping we’ll create something that will live after us, even if that’s only a TV sitcom. When you meet someone like Jane Badler you recognise they’ve already managed that, in an odd way – after all, V has remained in the cultural consciousness for over 20 years, and will probably be around in some form forever. It continues to have fans, and as new technologies come out it gets re-released again and again: first on video, then DVD, then digital download, and undoubtedly it’ll be available in whatever form comes next – probably directly beamed into your skull by the re-animated corpse of Bruce Gyngell (I believe Microsoft is working on that technology even as we speak).

In many ways, Jane Badler will outlast us all.

You can hear the whole interview at the Boxcutters site (why not subscribe to the show through iTunes?), but meanwhile here’s some brief excerpts:

What’s it like working on Australian television compared to America?

It’s very different. It was actually such a shock to me when I first did Australian television. First of all, it’s a democracy, there’s no hierarchy. In America when you do something, the actors are treated a little above everyone. You have the trailers and the umbrellas when you walk out – you kind of have this special feeling about yourself. Here you’re really part of the crew, actors are equal, a part of the production. There’s no special treatment. When I did Cluedo nobody had a dressing room or a trailer, nothing, we all dressed in the same room, men, women… it was all behind the clothesline, if you could find a little place to change, and it was all a bit shocking to me really.

Blue Heelers I particularly struggled with. Because I wasn’t used to the really fast pace. Lighting took two seconds, and I probably under-prepared because I didn’t realise how incredibly quick it was. And they were so good, the actors on it… that’s the whole thing about television, you can get out of the habit. I’ve been doing mostly theatre and cabaret so suddenly I forget how to act on television. I’m too big again, you have to bring it right back.

What did you play in Blue Heelers?

I played some kind of country woman who had this older man, much older man, as her lover – like a Senator – who died. And they wanted me to play it like I loved him, and I wanted to play it like I was just this money-hungry woman who didn’t love him, so  there was this conflict of interest. (laughs) Because I like playing characters that are a bit… devious. So I remember I ended up having to play it like they wanted and I had a really hard time crying over the loss of him –  they had to do the crystal tears because I just couldn’t cry at all. I don’t know, I just didn’t love that guy! Sorry! It was really funny, but in the end I hope they were happy with it.

How do you approach a character like Diana? Presumably you can’t spend much time working on her back-story…

It was very much an “in the moment” sort of thing. And then it started to engulf me and I was able to just do Diana. In the series I would walk on set strutting, thinking “I am Diana”. I loved it, I felt so powerful.

The show continues to get fans, doesn’t it?

I’ve been on facebook recently, the amount of activity astounds me. I spend a lot of time on facebook – I don’t do anything, I just answer. Every day I get ten or twelve, “I love you, I love you, are you the real Jane? are you the real Diana?”. Young. Good-looking. Men. From Brazil, from Argentina, from Ireland, it’s just unbelievable. Young hip people, I’m not talking about oldies! 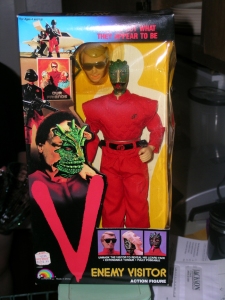 How big was V at the time?

There were dolls, and there were comics, and there were trading cards, and posters – I did David Letterman and I showed him the toys and the dolls with the heads that would come off when you squeezed their stomach, and they’d be lizards underneath…

I was recognised a lot then, it was great. If I appeared somewhere there’d be crowds and crowds of people, it was definitely a very intense time.

Did you enjoy that?

You know what it is? Looking back, I think wow, wouldn’t I kill for that, think of all the people to come to my concerts with no promotion at all, now when I feel like I’ve really got a good product to sell. But at the time it was really freaky, I was in my 20s and it happened out of nowhere, for a role that I didn’t know if it really justified it or not…  it was bizarre. It’s bizarre how these things happen.

The full interview can be found here; and beneath the following links you can see the moment that made Diana famous…

Shopping helps us grow! Buying DVDs from the following links will help The Outland Institute continue its vital work:

This entry was posted on Tuesday, December 9th, 2008 at 9:23 pm and is filed under television. You can follow any responses to this entry through the RSS 2.0 feed. You can skip to the end and leave a response. Pinging is currently not allowed.

9 Responses to Jane Badler Speaks Near The Outland Institute