A long time ago – in a galaxy far, far away –  David Ashton was watching all of the AFI Best Film winners in order… so you don’t have to. Today he visits a mythic time we call “1981”…

1981 began on a Thursday and was to go on to feature over fifty further Thursdays spaced evenly throughout the year. It was the year that the Yorkshire Ripper was caught and a year that saw endless mugs and tea towels commemorationg the royal coupling of Charles and Diana, who I believe went on to live happily ever after. The pop charts were dominated by Kim Carnes’ Bette Davis Eyes, Soft Cell’s Tainted Love and the timeless Stars on 45.

Meanwhile the movieworld’s obsession with science fiction had shuffled slightly sideways to fantasy; Clash of the Titans, Dragonslayer, Excalibur and Time Bandits were all released in 1981, with only Outland (no, not that one) flying the flag for SF. Other significant films of this year were comedies Arthur and The Cannonball Run; Wolfgang Petterson’s claustrophobic submarine drama Das Boot; Sam Rami’s low-budget marvel The Evil Dead; a post-modern adaptation of John Fowles’ post-modern novel The French Lieutenant’s Woman; the morality play Mephisto; the sentimental On Golden Pond and the blockbuster team-up of Lucas and Spielberg for Raiders Of The Lost Ark. Also a surprising number of werewolf movies; The Howling, Wolfen and An American Werewolf in London all came out this year. The Cannes Film Festival awarded the Palme D’Or to the politically-charged Polish film Man of Iron; in the US the Academy was handing its top award to a period story about rival athletes accompanied by a synthesizer score, Chariots of Fire.

In Australia, Bruce Beresford was documenting Australian surfie life with Puberty Blues – a surprisingly rare Aussie film about beach culture – and Richard Franklin directed Roadgames, a sort of Rear Window-on-wheels starring American actors Stacy Keach and Jamie Lee Curtis. Perhaps the most significant Australian film released this year though was Mad Max 2: The Road Warrior. Few films can be attributed with creating their own genre but MM2, with its mix of post-apocalyptic dystopia, punk fashion and gory car stunts has been endlessly copied, usually by inferior films.

The Australian Film Institute has little interest in such Ozploitative genre fare, of course, and had its eyes on a period story about rival athletes accompanied by a synthesizer score … 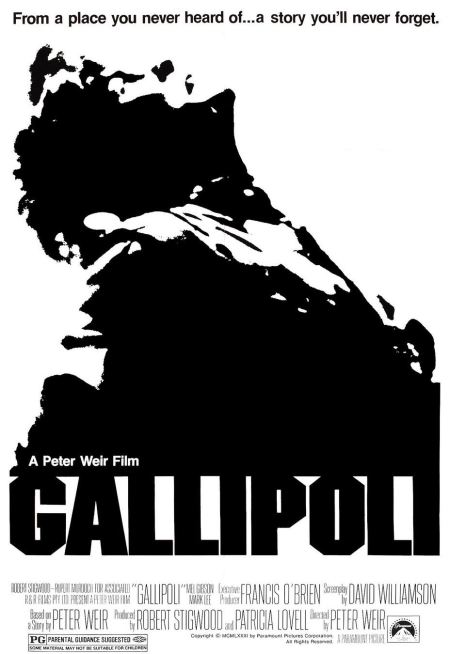 What’s It All About?

In 1915, farmboy and runner Archy (Lee) meets railway worker/runner Frank (Gibson) in a rural athletics competition. Initially rivals, they soon become friends and trek across the desert together to Perth where they join the army. Although they end up in different regiments they meet again in Egypt during training and in Gallipoli where they take part in the Battle of the Nek.

Is It Hauntingly Beautiful?

Not really.Although it features some fine cinematography – particularly of the desert vistas of Australia and Egypt – Gallipoli is made in quite a straightforward commercial style, favouring plot and character over mood and atmosphere. However, its weighty subject matter and necessarily downbeat ending give it the required gravitas to be award winning. Plus it’s not just a coming of age story, it’s Australia’s coming of age story.

Is It Any Good?

Two newspaper polls (in The Australian and the Herald Sun) recently voted Gallipoli to be the Bestest Australian Film Ever, it has its own postage stamp and it’s about one of the most cultural significant moments in Australia’s post-colonial history. In other words, this film comes with baggage (or is it the viewer who has the baggage?) which makes it difficult to review objectively. Non-Australian readers may not be aware that the date of the ANZAC landing at Gallipoli is a public holiday in Australia, and generally the memory of “our brave diggers”is held sacred enough that politicians are always quick to evoke it when they’re in need of some cheap sympathy. The commonly-accepted version of the Gallipoli myth goes something like this: Australians were all innocent happy-go-lucky larrikin farmboys who went off to fight in the first World War with a mixture of bravery and naïve belief in fraternity with Great Britain. Thanks largely to the incompetence and callousness of posh British officer-types they were slaughtered at Gallipoli and this was the nation’s ‘coming of age.’ By presenting this myth in a suitably artful manner Peter Weir’s Gallipoli was pretty much assured a place in the Great Australian Movie pantheon. 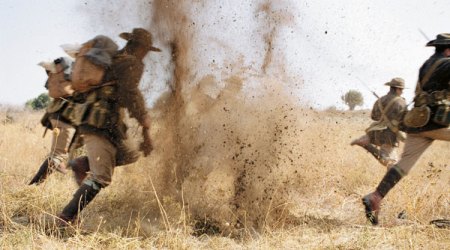 This is not to say that it’s a bad film, or that it was made with any cynical intent. In 1981, with the Vietnam War still fresh in people’s minds there was probably never any question that this would be an anti-war film, as are most films about the first World War. Weir and Williamson choose to tell the ANZAC story by following two young Australian men as they decide to sign up for the army, train in Egypt and finally go to fight in Turkey. The film spends less that a third of its run time in Gallipoli itself and the two protagonists aren’t involved in the fighting until the film’s final moments. As well as no doubt making the film less expensive, restricting the war scenes to the final part of the movie makes the point that the soldiers’ lives were thrown away pointlessly – there’s no heroic meaning to their ‘sacrifice’. You can see a more extreme version of the same idea in the British movie Overlord (1975, directed by Stuart Cooper).

In fact, Gallipoli is mostly about that other beloved Australian myth – mateship. Frank – whose Irish background makes him more cynical about “King and Country” than Archy – joins up mainly out of solidarity with his friend. The middle part of the film – in Egypt – is all about the good-humoured camaraderie between the troops. And the final moments of the film (SPOILER ALERT) owe a lot of their power to the fact that one of them dies and the other doesn’t – Archy’s death has more impact because it also kills the friendship between him and Frank. If they’d both gone over the top together perhaps the ending would perhaps have seemed more of a heroic tragedy, rather than a pointless tragedy. 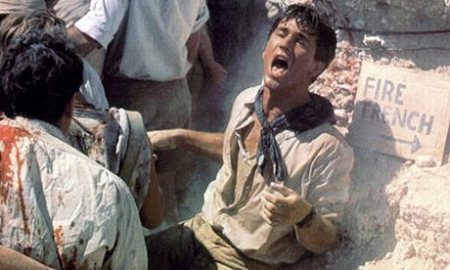 This is a very well made film – skilfully directed with fine performances and the production feels epic in scope – but there is very little in it which really surprises or shocks.

Here’s what Janet Maslin of the New York Times had to say back in ’81;

“Much of Gallipoli has a full-blown, almost romantic style more akin to that of My Brilliant Career than to Breaker Morant, another Australian film dealing with that country’s military history. There’s nothing pointed in Mr. Weir’s decorous approach, even when the material would seem to call for toughness. But if the lush mood makes Gallipoli a less weighty war film than it might be, it also makes it a more airborne adventure.” 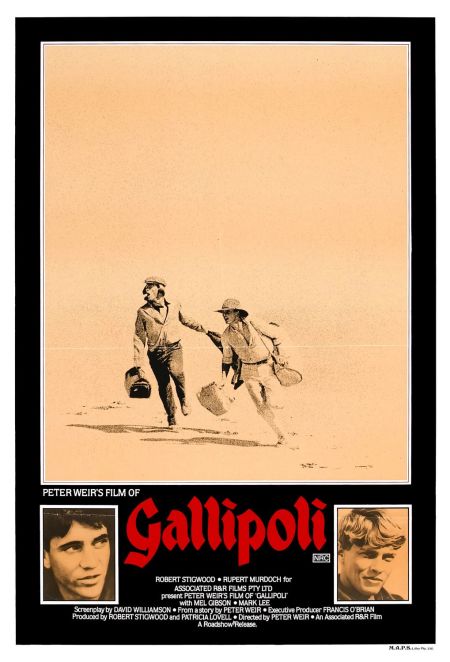 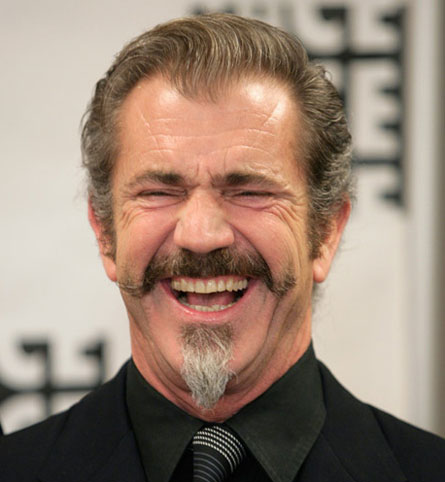 Peter Weir had spearheaded the Australian Film Renaissance of the 1970s with the genre-bending The Cars That Ate Paris (1974) and the highly-praised Picnic at Hanging Rock (1976). After Gallipoli, Weir achieved great critical and commercial success with films including Dead Poets Society (1989), Green Card (1990), Fearless (1993), The Truman Show (1998) and Master and Commander (2003).

Mel Gibson’s first great iconic role was as the title character in the Mad Max series but it was Lethal Weapon (1987) and its sequels which made him an A-list star. He went on to become a director and in 1995 had the world at his feet when he directed and starred in the hugely successful, Oscar-winning Braveheart. Somehow Gibson has failed to do anything remotely as acclaimed or successful since, although his 2004 film of The Passion of the Christ drew big audiences of gore-hungry Christians.

Cultural baggage or bestest film ever? Add your comments below. You can read previous instalments of this series by clicking “afi best film series” in the categories menu on the right. You can buy Gallipoli on DVD here – Gallipoli – Collector’s Edition (1982) [DVD]

. purchasing through this link will help The Outland Institute and possibly create world peace*. Image from The Royal Pop-Up Book taken from Arty Bees website – http://www.artybees.co.nz/. David Ashton will return in… Lonely Hearts (1982).

This entry was posted on Tuesday, April 21st, 2009 at 4:06 pm and is filed under afi best film series, film. You can follow any responses to this entry through the RSS 2.0 feed. You can skip to the end and leave a response. Pinging is currently not allowed.