The Cauliflower Of Morbius

So, I was tidying around the website – polishing the fonts, putting doilies on the html code, that sort of thing – and I found this image in the comments that you may have missed the first time around. Either enjoy the sheer inconguity of it, or if you’d like to know why this exists read our review of The Doctor Who Cookbook and the follow-up article.

Thank you to David AA for his photshopping expertise, and why not buy a copy of The Brain Of Morbius

from amazon.co.uk? Part proceeds go toward buying John coffee. Or buy the Doctor Who double pack of Kinda and Snakedance

just because they’re both grouse and have giant snakes in them.

Last week on Great Literature I featured that classic tome, The Doctor Who Cookbook. At the end of the article I included the full recipe for Elisabeth Sladen’s Cauliflower Cheese – you may remember Elisabeth Sladen as dauntless lady journalist Sarah-Jane Smith – here’s a picture of her being possessed by a stone hand while dressed as Andy Pandy: 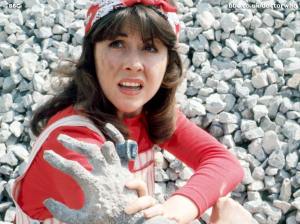 I set the challenge to Outland Institute visitors to make this dish at home and report back (the Cauliflower Cheese, not the stone hand). I didn’t think anyone would be brave – or foolhardy – enough to try…

I was wrong. Journalist and travel-writer Tim Richards was up to the task, and he even invited me along to try the finished product (incidentally, Tim and I share a set of parents – it’s a funny story).

Tim has sent in this report:

END_OF_DOCUMENT_TOKEN_TO_BE_REPLACED

Great Literature Of The 20th Century: The Doctor Who Cookbook 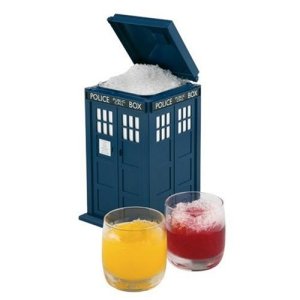 When Doctor Who returned in 2005, it brought with it a flood of merchandise. The BBC had shaken off it’s public servant past and now embraced the market place with moist abandon. It appeared there wasn’t anything you couldn’t stick a logo on, or shape like a TARDIS.

There were books and toys, obviously, but how about a TARDIS ice bucket? Or soft wardrobe

, a bamboo curtain or a cereal bowl in which the face of David Tennant appears – like a holy redeemer – as you eat your wheaties?

Old-school Doctor Who fans could remember that back when we were young… the merchandise was rubbish. The cool toys were always for the American shows, while Doctor Who tended toward children’s books that felt like they were written by people who’d never seen the television show. Or any television show. Or even a book.

In the early 1980s Doctor Who was enjoying a particularly popular phase in Australia. Peter Davison (“The Bloke From That Show About The Vets

“) was the Doctor, there was an Aussie in the TARDIS, and Myer even brought Davison out to do a tour of shopping centres and champagne breakfasts. Though things would sour in the mid-80s, leading the the show’s cancellation at the end of the decade, there was a sense in 1984/85 that you could brighten any book with a Doctor Who logo.

Which brings us to today’s book – The Doctor Who Cookbook