Yes, I’m aware that the updates here have been… um… sluggish. I’ve been writing a TV show! Leave me alone! Anyway, in September I gave a presentation about Melbourne and pop culture at Aussiecon 4, the 68th World Science Fiction Convention. Here is an edited transcript: 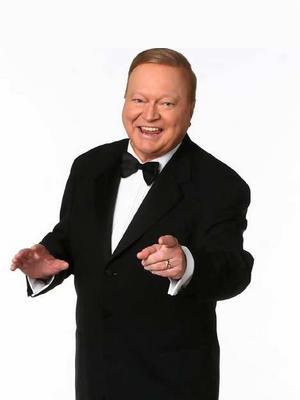 Melbourne is a city of culture. We have more cafes you can discuss arts funding in than any other Australian city, and many live music venues that are now pizzerias. We’re also home to Australia’s most exciting cultural institutions – ChamberMade Opera, Chunky Move, Circus Oz and Bert Newton.

But as well as all that “unpopular culture”, we also are a city that celebrates the popular stuff, being home to music, comedy, film, television and Bert Newton. 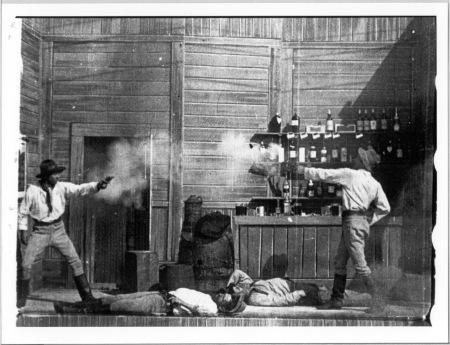 We’ll start with film, because Melbourne was home to potentially the world’s first feature film, The Story Of The Kelly Gang, which was filmed here in 1906. I say potentially because – like The Macra Terror

– only about 10 minutes of it still exists and no one can agree on how long it was. It was filmed in bushland around the city, as well as in St Kilda, and it was made for 1 100 pounds, roughly double the average Australian film budget of today.

Since then Melbourne has been home to – literally – dozens of films, including US productions like Charlotte’s Web and Where The Wild Things Are, to local classics like that thriller with Jimmy Smits in it that no-one saw, or the perennial audience heart-warmer, Romper Stomper.

But you say “Melbourne” to most cineastes and they’ll think of one thing – Terrible Nicolas Cage Movies That Aren’t The Wicker Man. 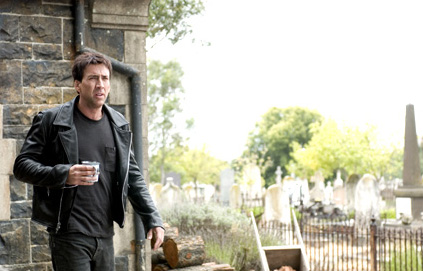 In the Terrible Nicolas Cage Movies That Aren’t The Wicker Man oeuvre we can look at the underwhelming superhero drama Ghost Rider, the underwhelming Christian apocalypse romp Knowing, and the terrible Queen Of The Damned. He wasn’t in that, obviously, but he could have been and it wouldn’t have helped. So let’s have a look at some of the locations you may care to visit.

Ghost Rider is set in an unnamed Texan city, a place apparently famous for its cafe culture and W-class trams. We meet our hero when he performs a stunt I no longer remember at the SoBeDome – wikipedia tells me it involved a helicopter.

In real life this is Docklands Stadium – ah, Colonial Stadium. No, the Telstra Dome. Etihad Stadium… or whatever it’s called this week.

You can take a tour here if you like and then walk into Docklands. Docklands is interesting in that it’s a bold experiment to see what would happen if you took a place, covered it in concrete and then never went there. Toward the end of the film – 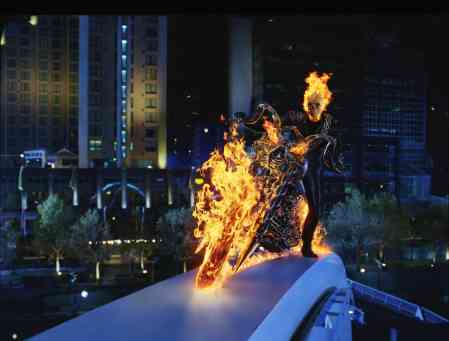 – there is a presumably exciting scene where the Ghost Rider is trapped on a bridge, each end blocked by a police car. This takes place here on the Trinity Footbridge, which you really can’t miss, as it’s in the centre of the city.

It’s also in actuality a pedestrian bridge. This makes this scene more involving for people from Melbourne because we get to ponder the logistics of it all. “Do you think they had to use a crane? Or are the added with CGI? Oh, what just happened?”

Next up is Knowing – this is a film that really will change your life, in that your life will be 122 minutes shorter by the time it ends. Knowing is set in Boston, a place famous for its cafe culture and W-class trams. If you want to tour the Knowing locations you’ll have a nice time as it covers everything from Southbank to the Melbourne Museum. I was particularly pleased to see the perennially empty square outside the Axa building on 447 Collins Street get turned into a New York plaza, possibly the only time I’ve ever seen people in it. Incidentally, the AXA building also appears in Ghost Rider in the important role of “Skyscraper base”. And a thrill for any Melbournite is that near the end of the film we have the sight of the Parliament building covered in people fleeing in terror.

This isn’t the first time Melbourne has been destroyed on screen, however. 1959’s On The Beach, based on the novel by Neville Shute, was set in Melbourne, a city famous for it’s… no hang on. Set in the future year of 1964 it follows a number of characters as they wait for nuclear fallout to reach Australia and kill the few people left alive. It was a film that finally answered the question “how grim can a film with Fred Astaire in it really be?”.

It was during filming that Ava Gardener was supposed to have said Melbourne was “the perfect place to make a film about the end of the world”, although this later turned out to have been a joke by reporter Neil Jillet. It says something about the Melbourne psyche that the most famous quote about us is both derogatory and fictional. 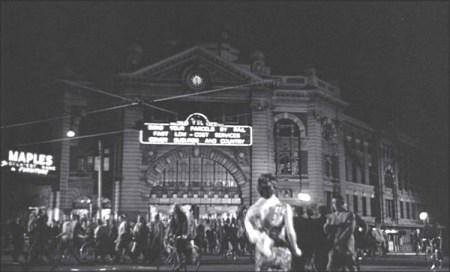 On The Beach has excellent shots of the GPO, the State Library and Flinders Street Station, all of which still exist and most of which are pretending to be something else. There’s also some sequences on Phillip Island which were actually filmed in California, which is an odd concept (you can tell it’s California because the penguins are all buff and have alarmingly white teeth). There was a TV remake of On The Beach in 2000 which starred the poor man’s Bryan Brown… Bryan Brown.

Finally there’s Queen Of The Damned, which uses Federation Square to play London, a city famous for its cafe culture and W-class blah blah blah – but really, less said the better. Instead, here’s a picture of a grumpy Nicolas Cage next to a Thylocine.

Like film, Melbourne was also the home to television in this country. TV started in Australia with coverage of John Howard‘s personal Narnia, the 1956 Olympics. Melbourne now makes all sorts of shows, everything from suburban soap-operas like Neighbours to inner-city soap-operas like Offspring. Truly, a gamut.

We’re also a hotbed of musicality – everyone from Kylie Minogue to Nick Cave has left here to live somewhere else. The most obvious music-based location in Melbourne is the Nylex Sign on Punt Road which was erected as a celebration of the Paul Kelly song Leaps And Bounds. Plans are already underway for a 50 metre high Donald Bradman, and the world’s largest gravy.

John Richards is the co-creator and writer of the ABC’s upcoming gay-science-fiction-fan comedy Outland, one of the hosts of the Boxcutters podcast, and is too lazy to update his blog more than three times a year.

Many of the films listed here are available from amazon.co.uk (at time of writing this includes free postage to Australia if you spend more than 25 pounds!). Why not treat yourself to Ghost Rider

(or on Blu-ray!), Knowing, Queen Of The Damned

, Charlotte’s Web, Where The Wild Things Are, that thriller with Jimmy Smits in it that no-one saw, Romper Stomper, On The Beach and look! Some dramas involving the 1956 Olympics! Purchases made through these links will keep John in coffee and cake. Mmmmm, cake.

This entry was posted on Sunday, November 7th, 2010 at 6:19 pm and is filed under film, pop-culture, television. You can follow any responses to this entry through the RSS 2.0 feed. You can skip to the end and leave a response. Pinging is currently not allowed.