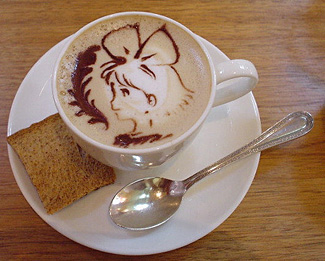 “You are going to have a piece of policy that comes direct from the manic monkey cafe of inner-suburbia nirvana-ville straight to you!”

Well, crikey. When Senator Barnaby Joyce frothed over (like a vigorously prepared cappuccino) with these words in Canberra in June, a few thoughts occurred to me:

1) Canberra has that effect on people.

2) Where can I find this Manic Monkey Cafe?

3) And do they do good lattes?

Do you consider yourself a champagne socialist? Are you a member of the cappuccino-sipping elite?

If those expressions seem odd, it’s because they’re dated. Champagne socialist was coined some decades ago to describe a left-leaning toff, and “cappuccino-sipping” only carried opprobrium when a cappuccino was new and trendy – a time we now know as “the 1980s”. When your aged mother’s favourite drink is a cappuccino, you know it’s no longer cutting-edge. I suspect even Senator Joyce knocks back a cappuccino from time to time.

However, beverage-based insults are too handy for right-wing hacks to discard, so they’re updated from time to time. The current standard forms are “latte-sipping” and “chardonnay socialist”. A quick google of Andrew Bolt’s blog on the Herald Sun turns up over 700 instances of “latte-sipping”, though they all seem to emanate from comments left by his readers (maybe Bolty likes the odd latte himself).

Yes, I’ve read Bolt’s blog so you don’t have to; here are some fine examples from his followers:

But these are, frankly, looking tired. Walk into any shopping mall in Melbourne, and you’ll hear salt-of-the-earth tabloid-reading Aussie diggers ordering a “lartay”. And chardonnay is ubiquitous, even if it’s recently been overtaken by sauvignon blanc as Australia’s best-selling white.

So we clearly need new stereotyping beverages. The hot beverage, luckily, is easy to sort out. “Chai-sipping”has already had a bit of a test-drive online, and you must admit it’s perfect. Even better, it should last for a while – can you imagine your average outer suburbanite strolling into the local mall cafe and loudly insisting on chai?

The insulting wine is more problematic, with no obvious candidate. Ideally it’d be a white varietal much favoured by wanky inner-city lefty types given to discussing the intricate differences between street art and graffiti. Speaking as a wanky inner-city lefty type (who knows that stencil art is good, while tagging is bad), I’d tentatively put forward viognier for the honour; I can imagine myself as a viognier socialist.

But I’m not inflexible on this. Which white wine should a 21st century trendy lefty sip? And should coffee give way so easily to chai? (ristretto-sipping elites, anyone?) All suggestions are welcome. Unless, of course, you’re too busy saving the gay whales or inventing those mounds of climate change evidence to take part.

Tim Richards – Travel writer and macchiato sipper (so sue me).

You can find Tim’s travel writing at Aerohaveno, and his Twitter feed here.

This entry was posted on Saturday, August 15th, 2009 at 7:57 pm and is filed under comestibles, politics. You can follow any responses to this entry through the RSS 2.0 feed. You can skip to the end and leave a response. Pinging is currently not allowed.