Tilt-Shift Photography: Exactly Like Where You Are Right Now…

I was having lunch with my friend Roy. He was explaining why he should be allowed to legally marry his iPhone, and I was staring out the window, thinking about kittens. Suddenly I heard the words “tilt-shift photography”.

Roy then explained that Tilt-Shift Photography is a technique used to make images of real life look like pictures of models. For example, here’s an image from Photography Jam of Melbourne’s Southern Cross Station:

It looks fake, but it’s real, just like Kerri-Anne Kennerley. Here’s some images of Melbourne by Ben Thomas:

END_OF_DOCUMENT_TOKEN_TO_BE_REPLACED

Where The Streets Have No Shame: ACDC Lane

In 2004 a mighty battle raged at the Melbourne City Council. For months, behind closed doors, alliances were forged and broken, skirmishes fought and lost, decisions made and unmade. Even a Queensland church demanded its say.

What issue was so contentious even a House Of God had to be involved?

The suggestion that a small laneway be named after a thirty-year-old band. 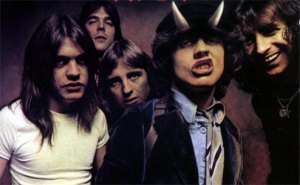