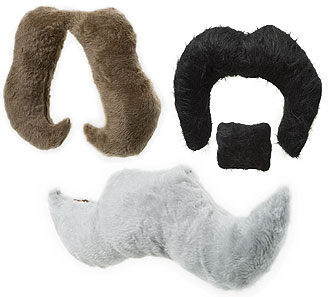 To celebrate the cultural phenomenon that is Movember, we continue our look at TV’s greatest moustaches. You can find part one here.

(And remember, Movember benefits the Prostate Cancer Foundation of Australia and Beyond Blue – you can find more about donating at the Movember website).

The Tom Selleck of Australian journalism. Here he is pissing off Margaret Thatcher:

In a recent review of Supernatural – possibly by Marieke Hardy – it was mentioned that the lead characters had to be brothers as otherwise you’d assume they were a gay couple. That idea also holds true for Simon & Simon, a buddy/detective series from the 1980s. One was butch, the other femme – one was blonde, the other had a moustache. Honestly, you can see them at IKEA now, can’t you?

A.J. was university educated and had book smarts, while Rick was a Vietnam vet and had street smarts – what else would you do but open a Detective Agency together? (Although even then A.J. preferred to do things by the rules while Rick was a maverick with his own sense of justice – oh, Rick!).

Just like Lantana at the 2001 Fort Lauderdale Film Festival, we feel it would be inappropriate to single out any single moustache from this great moustache ensemble and so we give them a special group listing.

Floyd plays bass guitar with Doctor Teeth and The Electric Mayhem. His name and jacket are a nod to the Beatles, while another musical joke can be inferred from the fact that Floyd is pink. Or at least, pink-ish.

Although the band is ostensibly led by Doctor Teeth, Floyd has been seen most often singing lead vocals. As well as the Muppet Show TV series, Floyd has appeared in the Muppet movies and even appeared recently (with the Electric Mayhem) performing with Hannah Montana “star” Miley Cyrus on a Disney Channel special.

In an episode of the first series of The Muppet Show, Floyd tells Kermit, “You’ll hate my music. You won’t understand it… Nobody understands my music. I mean, I don’t even understand it… If I didn’t know I was a genius, I wouldn’t listen to the trash I write.”

Tom Tucker is the Channel 5 newsreader in Family Guy. In the episode Stewie B Goode, Tom is fired and we learn that his moustache is station property.

Jason King – and Peter Wyngarde, the actor who played him – was a major sex symbol of the 1970s. No, seriously, he was. Women would mob him in the streets. I really, truly am not making this up. It’s hard to see exactly why now, but it’s true. He was part of the team on Division S, an Avengers-style spy-caper show at the end of the swinging 60s. Wyngarde’s character was so popular he was given his own eponymous spin-off.

According to the website Jason King’s Groovy Pad, in 1970 Wyngarde was brought to Australia to promote Channel 7. On March 1st he arrived at Sydney Airport to be greeted by 35,000 fans. In Queensland women climbed the outside of a hotel trying to reach his 12th floor balcony, and the hotel maids are reported to have stolen his chest hair while he slept. That last one just sounds made-up, but there you go.

He returned to Australia again in 1972 to similar hysterical scenes, yet these days he is barely remembered. Possibly that’s due to his conviction in 1975 for an act of “gross indecency” with a truck driver in the toilets of a bus station in Gloucester. Yes, the incredibly camp man with the outrageous clothes turned out to be gay – what were the chances of that? To quote Austin Powers – who was reportedly based on the character of Jason King – “I can’t believe Liberace was gay. I mean, women loved him! I didn’t see that one coming”. Wyngarde‘s audience turned their back on him and his celebrity faded, although he continued to make sporadic appearances in TV and film (such as Flash Gordon in 1980, and the Doctor Who story Planet Of Fire in 1984). It could be said Wyngarde‘s popularity was on the wane anyway, as IMDB doesn’t list any credits for the three years between Jason King ended and his arrest, but it’s interesting to see the effect the court case had on Wyngarde‘s career compared to George Michael‘s twenty years later.

It’s a decidedly less sexy list this week, isn’t it?

A Controller on Moon Base Alpha – effectively an air-traffic coordinator – Paul Morrow was played by Prentis Hancock who was obviously a go-to guy for 1970s science fiction; he also appeared in Survivors, The New Avengers, Chocky’s Children and as four separate characters on Doctor Who.

After the first series of Space: 1999 the show was massively revamped, with many of the major cast disappearing forever. Paul was among those who suddenly “moved to Queensland”, allowing room for a shape-changing alien and far fewer stories in which the crew met God (seriously, in that first series they seemed to meet God every two weeks).

“Are you free, Mrs Slocombe? I would like to discuss your vagina.”

Frank Thornton reprised the character for two series of Grace & Favour in 1992-93.

There’s been a lot of talk over the years about Number 96‘s ground-breaking inclusion of gay characters – but won’t somebody think of the Hungarian Jews? Is there any soap opera today brave enough to include that minority on our screens? No, only Number 96 was bold enough to wave the flag of Hungarian Jewish Pride.

Played by Johnny Lockwood, Aldo owned the delicatessen on the ground floor of 96 Lindsay Street, Paddington. Sadly that deli would be his grave, as he was killed by a bomb there in 1975. The Number 96 bomb became one of those soap-opera moments that are known to people who have never watched the series – like JR being shot, or someone falling off a water-tower in Bellbird (or did that just happen every week?).

Number 96 ran for 1218 episodes and was so popular they named a Melbourne tram after it.

That concludes the second 10 in our series – still more to come in our post-Movember wrap-up!

, Are You Being Served? – The Complete Series One to Five

, Are You Being Served? – The Movie

This entry was posted on Saturday, November 29th, 2008 at 2:38 pm and is filed under television. You can follow any responses to this entry through the RSS 2.0 feed. You can skip to the end and leave a response. Pinging is currently not allowed.